-The outline of Meadway Shipping Group

We have a holding company, Costas Bulk, and a ship management company, Meadway Shipping & Trading (MST), in Athens. Also, we have chartering offices in Singapore and Dubai.

Costas Bulk has a core fleet of five in-house vessels and five bareboat vessels. The fleet consists of one Kamsamax, six Ultramaxes, two Supramaxes, and one Handysize vessels, with an average age of less than seven years.

MST has over 30 years of ship management experience since its inception in 1988. It manages a fleet of 10 core vessels with a staff of about 50 people.

The medium & long-term charter fleet consists of 16 vessels, mainly owned by Japanese shipowners, including Kamsarmax, Supramax, and Handysize, for charter period of three to five years.

It is because we shrunk 1or 2-year periods charter vessels due to the high cost in current bullish market. We are now focusing on long-term charters of five years or more.

In the past one to two years, before the market began to rise, we purchased a total of five secondhand Japanese-built Ultramax and Handysize vessels from Japanese shipowners and leasing companies.

While the price of secondhand vessels was low at the time, I decided to invest in those because I felt the uprising market was approaching. The price of 9–10 years old vessel was 10 to 11 million dollars at that time, which was an attractive price. We see this as a very well-timed investment.

–How were you able to foresee the recovery of the dry market in advance?

Cargoes are the king in this market. In our daily chartering activities, we saw firsthand the rising demand for transportation of raw materials and grains. Also, only few newbuilding vessels being delivered around the world, we were convinced that the market was approaching a point of tightening supply and demand.

Namura’s 40,000 DWT Handysize have a very sophisticated design, shallow draft, low fuel consumption, and are highly competitive. The vessel will fit for ports in Australia and Brazil, as well aswhere it will be highly efficient in the transport of grain and other commodities in both Atlantic and Pacific waters,

The 40,000 DWT size is very attractive as long-haul transport increases in the dry market. If there are not enough grain cargo lots, we can transport a variety of cargoes such as coal and alumina.

-Forecast for the market going forward

We expect the dry bulk market to remain strong over the next 12 months. In addition to the limited supply of newbuildings, the market is being boosted by long-haul trade due to the Ukraine crisis. Europe is sourcing more coal from Southeast Asia to replace Russian coal, creating a new long-distance trade rarely seen before. Grain sources also must be replaced from Russian and Ukrainian cargoes.

The IMO’s EEXI regulations, which will start next year, will also be a factor in the rise. Older vessels will have to reduce engine power by 5-10%, which will lower their speed and squeeze the supply of dry bulk shipping tonnage on the market.

On the other hand, inflation in the U.S. and Europe is a cause for concern. Inflation rates in the U.S. has risen to 8% and in Europe to 7%. Interest rates will rise next, and many countries will follow. There are concerns about a slowdown in home purchases in the U.S., but it will be another year or so before the real economy slows, and the shipping market is pushed down significantly.

The price of ships is becoming extremely high, and it is difficult to place orders for newbuildings, which take two to three years to be delivered. On the other hand, secondhand vessels are readily available and will enjoy a high market for the next year.

After the EEXI regulations start, fuel efficiency will be a major key to the competitiveness of ships. We keep concentrating on high quality Japanese bulkers, and Japanese vessels will always give us the best performance. Furthermore, vessels with electronically controlled engines will be able to operate at full speed after the start of the EEXI regulations, providing significant advantages in ownership and operation. So, secondhand Japanese vessels with an electronically controlled engine which are 4-5 years old would be a very good buy.”

-Activities in the Japanese market

We would like to have various business opportunities with Japanese partners. We are always considering the BBC through lease financing with Japanese shipowners and regional banks.

We have been in the Japanese market for the past 12 years. We understand the mentality and corporate culture of the Japanese people very well.

Under the terms of the contract, we always pay a 10% down payment in the form of an advance on the charter fee when we sign a BBC contract.

We are also conscious of operating BBC vessels in the same way as our own vessels and keeping them in top condition. This is because if the ships are not in good condition, many problems could arise and hinder the day-to-day operation of the vessel.

Also, with the purchase option attached, there is a good chance that it will become the company’s asset in the future.

I think it is a reasonable idea for shipowners. However, I think there is a problem that it is currently difficult for inspectors to visit ships due to the corona pandemic.

-About decarbonization of ships

It will take a long time for zero-emission fuels such as ammonia to become widely used. Ammonia is toxic, and Russia is a major producer.

The small- and mid-size bulk carriers that we own and operate have limited space on board, and the hurdles to introducing LNG and ammonia fuels are high.

However, Japanese shipbuilders have a menu of highly fuel-efficient EEDI Phase 3 vessels, and by investing in these eco-friendly vessels, we will be able to reduce our GHG emissions. I think we are on a good track for GHG reduction.

The company’s priority is to ensure safe operations and to maintain a healthy working environment for seafarers, we have set a maximum period of eight to nine months on board. When the time limit arrives, we will go to a port where we can replace the crew, even if it means suspending the time charter contract to do so.

We are also working on introduce the Wi-Fi environment on board the ship, and the ship and the onshore office communicate frequently via Skype. All documents are in PDF format. Maintenance on the ship can also be viewed live from the onshore office. 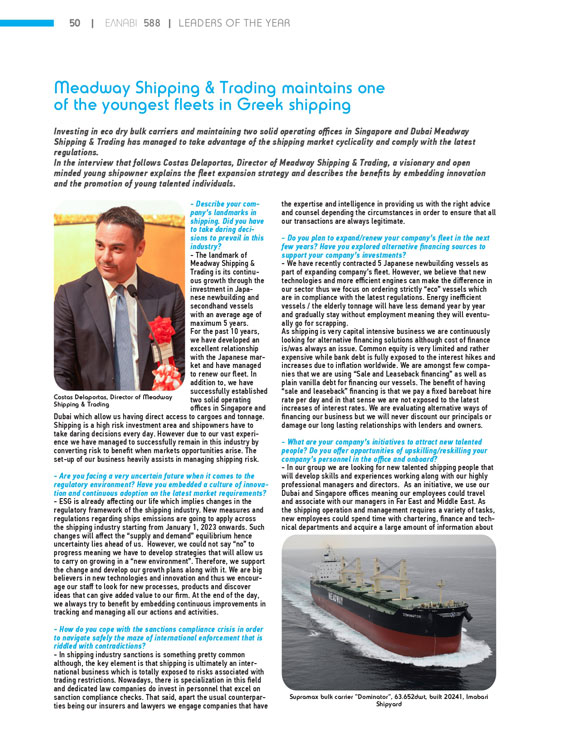 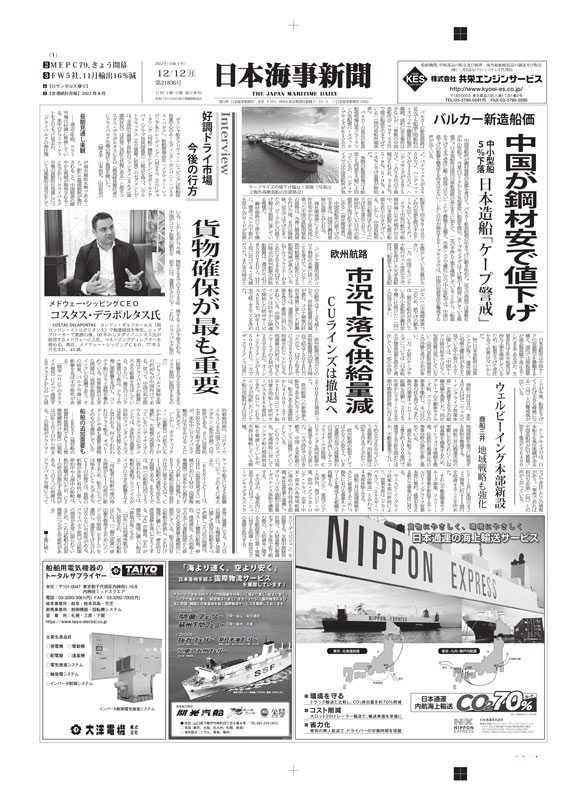